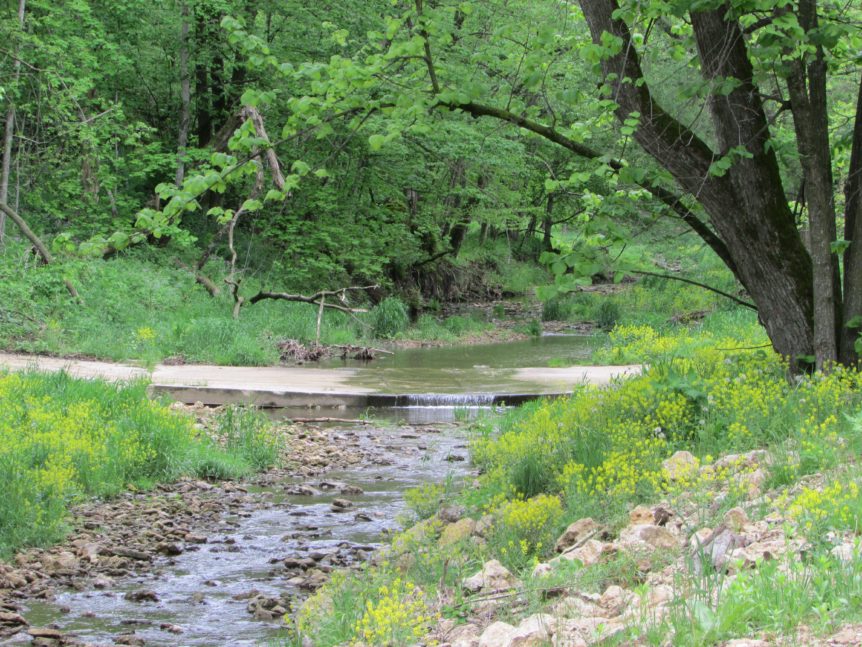 Bixby Park, through action of the State Board of Conservation, and as a direct result of voluntary contributions from the community and promotion of the affair by the commercial club has become a state park.

In going down through the awe-inspiring rock-bounded approach to the strip of land lying on either side of Bear Creek, two and one-half miles north of Edgewood, and upon entering that marvelous tract of nature-blessed territory, one wonders just how it has come down to us so unspoiled by human hands. In collaboration with R.J. Bixby, the Woodland Echoes has brought together the facts contained in this article.

Established in 1887–During the years 1887 and 1888 former state Senator, R.J. Bixby purchased three tracts of land from as many different individuals. The parcels were and the territory thus formed was afterward to become known as Bixby Park. Not long after this, the public highway was established through the land, and the natural beauty attracted an increasing number of visitors.

As the resort became better known and more popular, different names were suggested as being appropriate. At a gathering in August 1896, people from 10 different states were present. It was at that time that the Hon. B.W. Newberry was called on for an address. He took the opportunity to suggest that the spot be called Bixby Park, and when the audience agreed with him it was so christened, and has been known by that name since.

The State Board of Conservation has retained the name and the indications are that it will always be known as Bixby Park.

Log Cabin Built in 1897–In the year 1897, a commodious log cabin, the shell of which still remains, was built. Its object was to erect and preserve for future generations a building with all its details and furnishings such as the Iowa pioneers lived in. There were upper and lower rooms, a stone fire-place and chimney, a porch along the entire front with balcony overhead, and general equipment for comfort. Dishes, a cooking outfit, chairs and seats were placed in the cabin. Out-door tables, stoves, rustic seats and a long pole swing were added attractions. The spirit of the vandal, however, was soon in evidence and the wanton destruction which followed was pitiful. It showed that without competent supervision, such improvements were useless.

Discover Ice Cave–Several years after this, Captain Little of Strawberry Point, acquired by lease the right to mine for lead in the park. He was a gallant veteran of the Civil War, and in younger life had at one time worked in the lead mines near Dubuque, Iowa. He did not succeed in finding lead but he did discover the now famed ice cave. Starting in at a crevice he cut into the hill in a slightly downward course. With his helpers he pushed in a tunnel eighty feet long. A track was laid and a car was used in bringing out the broken rock. While work proceeded comfortably in the winter, during the hot weather of summer it was suspended on account of the intense cold in the tunnel, so cold that it formed ice and menaced health.

Many learned men from various parts of United States have made visits to the Ice Cave, but without agreeing upon a cause of the wonderful phenomenon. From tests, the temperature in the warmest summer weather is found to be twenty six degrees above zero. Ice disappears in the wintertime.

Contains Varied Vegetation–The claim has been made that a larger variety of trees and shrubs is to be found in Bixby Park than in any other place of a like area in Iowa. The highest scientific authorities from the State College at Ames and from the State University at Iowa City, as well as other schools, have surveyed the vegetation of the park do not dispute the claim.

For several years after the cabin was built, a register was kept and in it are many names of noted visitors. Remarks written in it include several quite lengthy poems, and the volume is prized as a souvenir by Mr. Bixby. With the taking over of the park by the state, funds such as an individual could not afford to expend, will eventually be devoted to the improvement of the scenic area. in addition the protection of the state police power (will) make for the continued preservation of its rarities and beauties.