Editor’s note:  In 1975, at age 82, Bryan G. Sherman wrote a memoir of his life, a charming description of growing up on a small Iowa farm in the 1890’s, of his education, his service in Europe as a soldier in WW I, and the manifold changes he saw through his life.

Although it is a story written for his family and containing family references, any reader with an interest in knowing and understanding the past will find the story to be compelling.

His manuscript has come to the Edgewood museum to be preserved for posterity as a gift of his grandchildren.  (Full disclosure–the interim director of the museum, Art Johnson, who is editing this series, is a grand nephew of BGS.)

The full story will be told in segments over the next few weeks on the Museum website with notices given on our Facebook pages. This first segment introduces the family, and provides a look at the life of a child in rural Iowa at the turn of the 20th century.

The Life of Bryan G. Sherman

This is written at the request of my family and some friends. To those who read this article, it is as near as possible true facts and no fiction. It is dedicated to my immediate family and is to be kept by some member of the family who is willing to keep it in his or her possession. As of right now it will be kept in the family of my firstborn Marilynn Clark who is at present living in our household and helping to look after us. When I or we are gone I hope it will be cherished enough to be kept along with other possessions for anyone who is interested to read (if worth reading).

This was written during the winter of 1974-75 all from memory and am leaving room at the end of each part, so if I think of something I have left out, it can be added later.  I am trying not to make it too long so as to bore the reader, but long enough to tell the story. If there are repeats please excuse them and say it is caused by old age. I don’t really consider myself old, but just old enough. I will soon be in my 83rd year and that in itself says quite a lot.

So now dear folks, On With The Story.

I was born February 27, 1892. My parents were George Stephen Sherman and Ida Marian (Easton) Sherman. When I was born I came to join five others, 3 boys and 2 girls. They were Henry Earnest born January 20, 1879; Ivan Fred born August 9, 1881; Myrtle Alice born October 28, 1882; Elmer Lorenzo born March 26, 1886; and Verna Isadore born December 29, 1889. There had been a son born near Quaker Mill (Manchester, Iowa) on September 20, 1877. My parents had then gone to Kansas where this son died at the age of 11 months on August 20, 1878. He was called William Parker Sherman and is buried in a cemetery near the town of Alton, which at that time was called Bull City. My oldest brother, Ernest, was born in Kansas at Bull City, and soon after, the family moved back to Iowa. Ivan Fred and Myrtle were born in Hardin County, and the rest of the children were born in or near Edgewood. My younger sister was born February 20, 1895 and named Letha Ida.

I was born in a log house on the farm 2 miles Northeast of Edgewood where I spent the first few years of my life until a new and larger house was built (see lead photo). The kitchen part, an addition to the original log house, was moved and connected onto the new house to be used as a kitchen. Then a few years later (1901) the kitchen was moved again and more rooms were added to make the present house, which still stands and is in use by the present owners, Robert and Rayma Fisher, though it has been changed in some respects. It was in this house that I spent all my childhood and adulthood until I retired and moved to town. 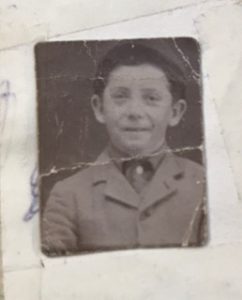 My early childhood was rather an uneventful one, considering things today, but was a very enjoyable time of my life. We three younger children were very close to each other until sister Verna went to high school. Her being away from home more left Letha and I often to play by ourselves.

During these early years I used to help mother a lot in the garden and I generally had a small patch of garden of my own to take care of. I remember I used to like to raise the telephone peas which had to be staked as they grew about 3 foot high. I used to go with my mother to the woods for wild strawberries in season. We picked strawberries in spring, and later on wild gooseberries.

Then in the fall of the year (generally after frost) came nut gathering time. This was a great event in our family. We would bring in several sacks of walnuts, and to husk them would pound them through a hole in a barbed wire spool. The spool was made with crossed boards at the end with a hole in the center. If the nuts were too large then we had to remove the husks by hand. This gave us some nice stained fingers. Later on we used a hand-cranked corn sheller to husk the nuts. It did a rather good job except it used to crack a few. To dry these nuts we used to set 4 posts in the ground and build a platform large enough to hold the walnuts and several sacks of butternuts. We never shucked the butternuts as it made them too rough when we cracked them.

Gathering the hickory nuts generally fell to Mother, Letha, and I. Sometimes Mother’s brother, Uncle Wren, would go with us and with a large post would bump the tree to make the nuts fall off. We would gather several sacks of hickory nuts, crack them, and use a pick, which was generally a horseshoe nail, to dig out the nutmeats and fill in the time while visiting. We also gathered hazel nuts which were plentiful until the brush was cut to make better pasture or land to be plowed for farm crops.

While still a youngster at home, my sister Letha and I used to go with Dad when grubbing stumps. Nowadays, a stick of dynamite does the job, but Dad did it the hard way. With shovel and ax and sometimes a tool called a grub hoe and a good sized pole, we would go from stump to stump. First he would dig around the stump and cut off the roots, then with the pole as a lever pry the stump loose. It was Letha’s and my job to use our weight on the pole while Dad cut the roots.

At Christmas time we children never got many toys. The girls generally got some kind of a doll (until they get older) but our presents were generally something to wear or read. On Christmas morning our stockings were generally filled with such things as fruit and small articles of clothing. About the only toy I can remember getting was a small box with wooden wheels and filled with building blocks. My most prized book was “A Child’s History” which I enjoyed more as I got older and in school.

In the winter when there was snow we used to go sleigh riding with some of the neighbor kids. We had a very sturdy home made sled (made by brother Ernest) which we used. There was a very steep little hill in the field across the road, on the Henry Smith property, which we used to use a lot. Other times we used the roadway and would start at our back door and go down across the yard and down the road for about 1/4 mile.

My sister Letha and I used to lead the horse (Old Pete) on the hay rope when putting up hay. I very distinctly remember the horse stepping on my foot one time and after that I was more careful. We kids had to herd cows in summer and watch to see they didn’t bloat on the fresh clover. When the pastures got short, we used to take the cows out in the hay field for feed awhile every day so they could get something to eat. Then after awhile we put them back in the pasture. Many times in the evening I had to go clear down to Bear Creek after the cows. I had to watch out for rattlesnakes on these trips. Sometimes I rode a horse (Old Daisy) after the cows.

During summer vacation when I was old enough I used to help with loading the hay. I stayed on the wagon and drove the team and packed the hay as the men or man pitched the hay up on the rack. We had no hay loaders in those days. Later on we had a machine called a loader that elevated the hay up on the wagon as the team pulled the wagon along straddling the windrows of hay. Nowadays, it is all baled and stored in the mow or chopped and put in silos

The grain was cut with a binder or by hand with a scythe like affair called a cradle. It was then all put in shocks to dry and later hauled in and put in stacks until threshing time. I will bring this up again later in my story.

I remember Uncle Wren going on long hikes with us younger kids, mostly in the spring when the flowers first came out. He also used to take us fishing down on Bear Creek. He was quite a hand to drink, but while at our house he didn’t have anything intoxicating and was always real good to us kids. He never married so he had no place of his own and used to spend quite a lot of time at our house.

He was a carpenter by trade and had built the 1st barn on the farm. The timbers used in the barn were all hewed out of logs with a tool called a broad ax and not sawed as all timbers are today. In later years when the old barn was torn down the timbers were used for fence posts around the cattle yard. Dad built a new barn in 1905 (40’ x 72’) (the timbers and shelving all came from our woods) with an eight foot stone wall two foot thick with the frame on top of it. Back then the carpenters stayed on the job and Mom and the girls had to get 3 meals a day for them.

In 1909 Dad built an addition on the west end of the barn making it 104 foot long. It didn’t have the stone wall but was frame (construction) clear to the ground. That addition was used as a horse barn and at that time was kept full. The mow overhead was used for hay which was put up loose and in later years the west mow was used to store the straw. That was after the threshing machine had a blower to blow the straw up into the mow. Balers hadn’t come into use much at that time.

(In the next installment, country school, and beyond)