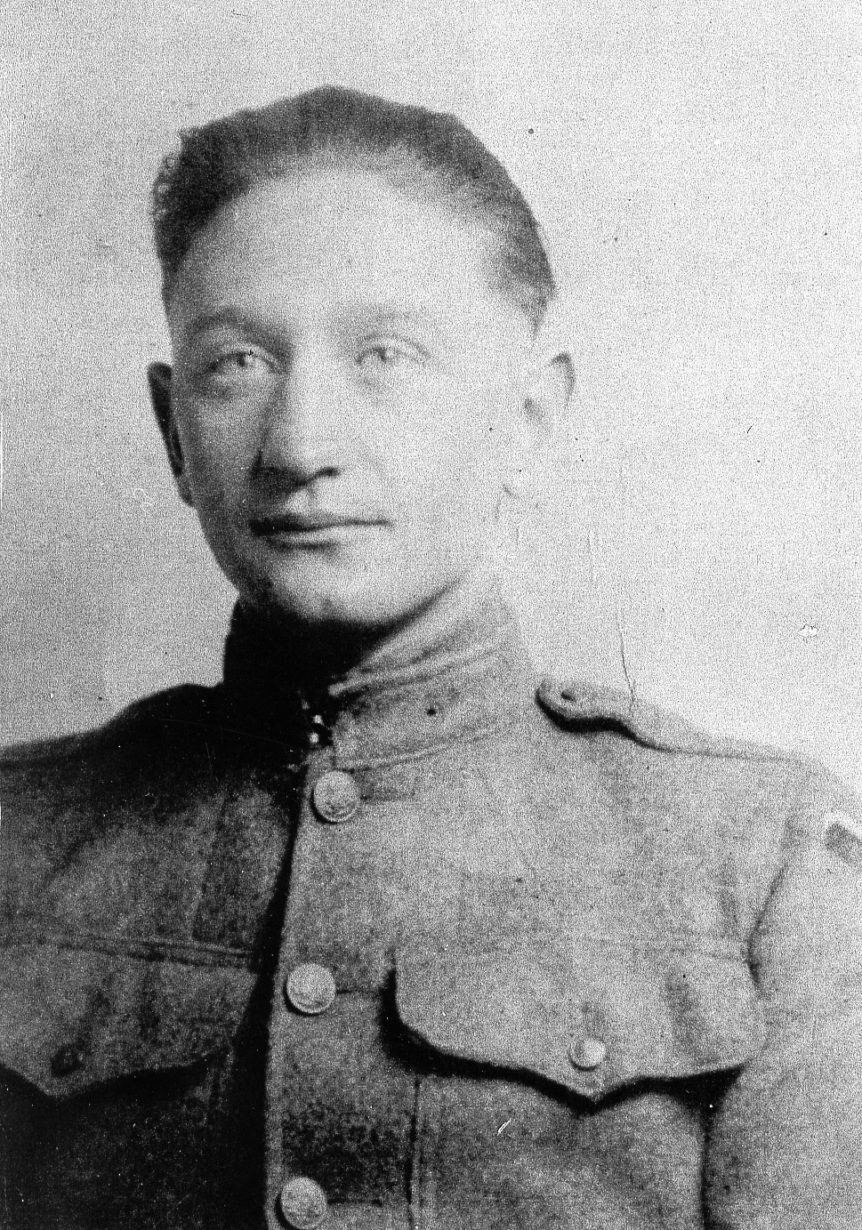 (The three letters below are taken from a photocopy of an article in the Edgewood Journal Nov. 14, 1918, provided by Lt. Col. Jerry Holtz, USAF (Ret), George Holtz’ son.)

Col. Holtz writes:  My father was wounded during the Battle of Bealleau Wood on October 9, 1918, in France.  He was an electrical engineer with the 56thEngineers, Company B. He was hospitalized for four months in France before returning to Fort Des Moines for further healing, and was then fit with a leg prosthesis.  He returned to Edgewood on July 14, 1919 and then made his home with his mother and two sisters, “Dukes” and Bertha.  (Ed. note—“Dukes” was the nickname of Katherine Holtz Richards DuBois, a well-remembered Edgewood personality.)

He also attended high school in Edgewood, graduating with the class of 1925 at age 30.  He later was trained to be a chiropractor, but due to his injuries was never able to practice his profession.  He taught himself to play the saxophone, clarinet, and fiddle, and supplemented his disability pension by playing in a number of dance bands, including “Don Rhines and the Ridgeriders.”  He also had his own band for a time called “George Holtz and his Treble Clef Serenaders.”

IS NOW IN THE HOSPITAL

Edgewood soldier lost left leg by shell while in France

(Letter from wounded George Holtz to his mother)

Dearest Mother: I have been wounded recently by being hit by a high explosive shell in the calf of the leg. I have been operated on and it was found necessary to amputate to save my life. The amputation was just above the knee. Now don’t let this worry you because I am coming out of it all right and consider myself pretty fortunate and believe that you will when you hear the whole story.

Let me tell you how it happened.  We were all in camp and Jerry started shelling about six in the morning sending over stuff as big as barrack bags. We were ordered into a French aboi (sic) for protection and were quite safe. In fact we were watching the French play a little game which they have invented, when without any warning a shell landed right in the doorway and I, being only 5 feet away, received the benefit of the explosion. None of the others were touched.

I was taken immediately to a first aid station then to a field hospital and finally to the evacuation hospital where I was operated on. I am being well cared for by American nurses and surgeons and if my improvement continues at the same rate I will soon be in a base hospital, and in a few weeks will probably be coming home. I received the gum that sister Bertha sent me. I have been visited by the French priest three times and I have made my confessions and taken communion twice.

Will close now with love to all.

(Letter from the Red Cross to one of George Holtz’ sisters)

Your brother has asked me to write and tell you that he was that he is here in an evacuation hospital having been wounded but that he is doing (illegible–well?) and having good care. He wanted you to know that he has had his left leg amputated and so will probably be coming home in a few months. He is very comfortable and will write when he reaches the base hospital. He said to tell you that he received the gum and to thank you very much for it.

The officers of his company came to see him and complimented him on his courage and manliness. He is in excellent spirits and was very anxious that you should not worry about him.

(Second letter from George to his mother)

I am able to sit up and write a few lines today and let you know that I am living through my operation.  Though to the sorrow of my heart I lost my left leg just above the knee. A deed that was possible to save my life.  I expect to be limping around pretty soon on crutches. I suppose it will be sometime before I will be able to use a cork leg.

Well I am getting tired so I must call this enough and close with a good luck to all.