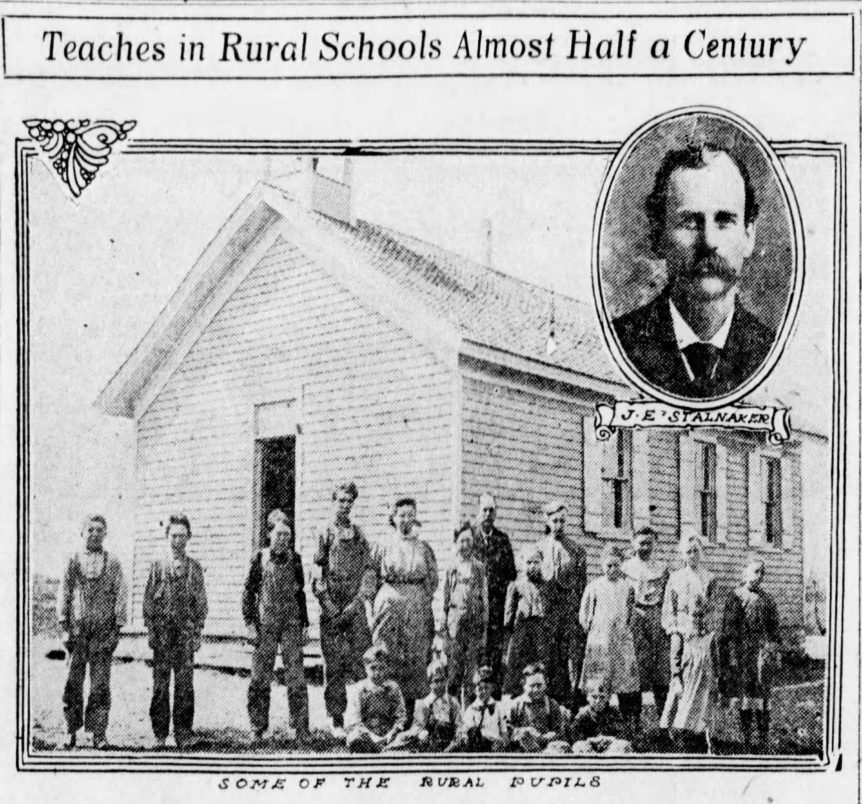 John Stalnaker Never Gave a Beating; Ran His Class Room Like a Republic.

M’GREGOR,Ia. June 14. Retired after forty-six years of continuous teaching in rural schools is the record of John E. Stalnaker of Lodomillo township, Clayton county. His friends claim, though Mr. Stalnaker is far too unassuming to advance such a claim himself, that it is the best record that has been made by an Iowa rural teacher in the schools of the home state.

But there is more to the story than mere length of service. All his teaching has been done within a few miles of the farm in Lodomillo township, near Strawberry Point, where he was born of pioneer parents sixty-six years ago and except for just four weeks, he has “boarded” at home all thetime. One year he was further away than comfortable walking distance but covered the distance on horseback morning and night.

He has been a farmer all the while he has been teaching, super­vising a well improved farm of 125 acres and taking a very active part in better farming movements in his community as he has in the good and helpful things of all kinds touching the interests of his locality. While teaching school and farming he found time to serve as justice of the peace for fourteen years, township assessor for twelve years, and in 1900 took the United States census. Almost everybody he entered on his census book had been to school to him.

He has been a great reader and student of public affairs always and has given liberally of his intelligence to the betterment of community life. In his day, like most of the pioneers of Clayton county, a great game region, he was fond of hunting.  Particularly he liked following the trail of the wild bees to the stores of honey in the bee trees.

Of late years Schoolmaster Stalnaker has been teaching the third generation of the people of the community, having his own grand­children in his school When he began teaching at the age of 19, the country where he taught was mostly a forest with a settler’s cabin here and there in the clearing.

His first school was held in a log cabin 16×20 and fifty pupils in it. His next school, also of logs and about the same size as the first, accommodated fifty-six sons and daughters of the pioneers. The seats were made of slabs set against the wall. The school teacher’s salary was $18 a month.

“The last school in which I taught,” says Mr. Stalnaker with obvious pride, “was somewhat different. It has new patent seats and teacher’s desk, a fine slate blackboard, a good organ, a large circulating library and about $50 worth of nice, framed pictures. We have a fine playground of one acre with about 100 trees which we have planted.”

From the little rural school of which Mr. Stalnaker has so long and faithfully been the teacher, many boys and girls have gone out to fill prominent places in the. world. They are Mr. Stalnaker’s pride and. their tributes in later years to the old schoolmaster have been a reward of duty well done and most pleasant to him.

“He taught for the love of the work and was never concerned about the amount of his salary,” says one.

“All the pupils respected Mr. Stalnaker and were friends with him,” says another. “He was especially considerate toward the smaller pupils and any who had difficulty with their work. I never knew a more sympathetic teacher. I remember that he would come out at the recess period and play baseball with the boys and assist the girls in their games. It was a pleasure for us boys to mingle with our teacher outside the schoolroom. It was a particular pleasure for us occasionally to walk part way home with him.”

Another gives this testimony: “Mr. Stalnaker depended very little upon text books in his teaching. He used his own devices, also allowing the pupils to use their own judgment in thinking out their problems. He allowed his pupils perfect freedom in their work, hence there was no formal discipline in his room, though it was the best governed school in the county. His one motto for his pupils was that they should not trespass on each other’s liberties or rights. He never needed to resort to corporal punishment. His school was always a little republic, the leaders in the different sports were elected by the pupils. I doubt if he ever studied formal-psychology and still he used the best psychology in his work.”

A greatly respected citizen as well as a well beloved teacher, Mr. Stalnaker has been in the little Iowa rural neighborhood where he has been content to live his life and do his bit for nearly three score years and ten.

“His influence and usefulness during the long years of his service cannot be measured,” is the tribute of one who has known him from boyhood, and “so say we all” is the response of the community.

The Edgewood Museum permanent collection has a scrapbook of student work done at Lodomillo School #5 in 1911 and 1912, compiled by long-time rural school teacher, John E. Stalnaker, who spent his entire career in the rural schools of Lodomillo township, Clayton Co. Iowa. The conjecture is this book was used to document the outcomes of Stalnaker’s teaching for review by school authorities. It contains sample materials from many areas of the curriculum including art, music, science, math, history, and English.